Currently two main (innovative) aviation technologies are being pursued: Hydrogen and battery-electric powered aircraft. Both have a significant potential to reduce air traffic related GHG emissions in the future, especially non-CO2 effects. However, both options require intensive further work of research and development before they can be introduced as mature and commercially viable aircraft technologies. From today's perspective this will take more than a decade.

Moreover, they require the implementation of a separate fuel / energy supply infrastructure (e.g. liquid hydrogen) as well as the development for corresponding production and storage infrastructure to produce hydrogen or electrical energy from renewable energies on a large-scale.

The use of hydrogen in aircraft, especially if it is intended to exceed the deployment in auxiliary turbines or on-board power supply, necessitate more advanced technological, infrastructural, and operational developments which go beyond to-day's standard of technology. To successfully incorporate liquid hydrogen in a commercial aircraft, essential components such as fuel tanks and crucial parts of the propulsion system must be completely redesigned.

Furthermore, sustainable production and sufficient supply of hydrogen is necessary for it to reduce climate gas emissions from aviation. This specifically requires an abundant supply of renewable energy (e.g. wind and solar power). The path for the expansion of hydrogen is currently paved out on a political and regulatory level in Germany and Europe. In other words. The availability and supply of (sustainable) hydrogen will, particularly in the early stages of large-scale use, most likely be limited and the many areas in which this fuel is applicable, will face a competitive situation. It must therefore be ensured, that hydrogen is also available for aviation if a large-scale use is intended.

Battery-electric aircraft, similarly to hydrogen aircraft, still face multiple technical challenges in aviation. Especially batteries with a sufficiently high energy density and proportionately low weight play a key role in achieving the use of fully electric aircraft. Today's current batteries (still) have a considerably low energy density; compared to conventional (fossil) fuel this is lower by a factor of 25. It is, thereby extremely difficult to carry abundant energy on board to fuel the respective flight, henceforth strongly reducing the possible range at which the aircraft can be operated. The range of application of electric aircraft is, from today's perspective, primarily limited to short-haul flights or to areas of application in the urban air.

Furthermore, the use of battery-electric aircraft requires the appropriate airport infrastructure for charging or rapid replacement of batteries. This type of infrastructure, comparable to that of hydrogen, should at the very least be available at the central hubs in the respective route network of the individual airlines so that electric aircraft be used as efficiently and comprehensively as possible.

For this technology to reduce climate gas emissions, the energy – as with hydrogen – must be generated from renewable sources such as wind or solar power. The required supply of renewable electrical energy is potentially subject to strong competition, especially in market ramp-up phases, and may pose challenges in the further development of conversion plants (e.g. wind power plants).

Technological innovations provide the opportunity to massively reduce climate gas emissions in aviation. This, however, requires years of intensive development work before experience with this technology is made and the first machines can be deployed in the first commercial flight routes (e.g. short-haul routes). Furthermore, it will take years to decades before these new technologies can sufficiently be fused with the current aircraft fleets, subsequently reducing the climate gases in a magnitude that is noticeable.

Reason for this is the aircraft´s long technical utilization period and low modernization cycle of the fleets along with a continued use of the aircraft.
Therefore, options must be pursued parallel to the development and availability of these new technologies, which are (“immediately”) available in the near-term and that facilitate a notable reduction of GHG emissions within currently existing aircraft fleets.

Sustainable aviation fuels (SAF), compared to innovative technologies, can be made available and be scaled up in the nearer future. They can be used as so-called “drop-in” fuels in existing aircraft and the existing fuel supply infrastructure. The achievable climate GHG reductions by SAF therefore neither depend on fleet modernization rates nor comparable factors. SAF are consequently necessary for a timely and significant reduction of GHG emissions in aviation. A large-scale SAF market-ramp-up in the near future is only viable based on sustainable biogenic SAF, while electricity-based SAF are especially necessary in the long-term [WEF 2020; CST 2020]. It is crucial that only sustainable feedstock are used for SAF production.

The term, biogenic or biomass based SAF (biokerosene), covers a broad scope of different SAF options that are produced from oil, fat, starch, or sugar containing biomass and/or lignocellulosic (woody and semi-woody) biomass. This includes for example plant oils, algae, specific components of energy plants, organic municipal- and industrial-waste, or agricultural and forestry residues.

The term electricity-based SAF or Power-to-Liquid (PtL) SAF defines sustainable aviation fuels, which are not produced based on biomass but solely based on electricity from renewable sources, water, and CO2.

The following figure depicts the most relevant SAF conversion pathways: 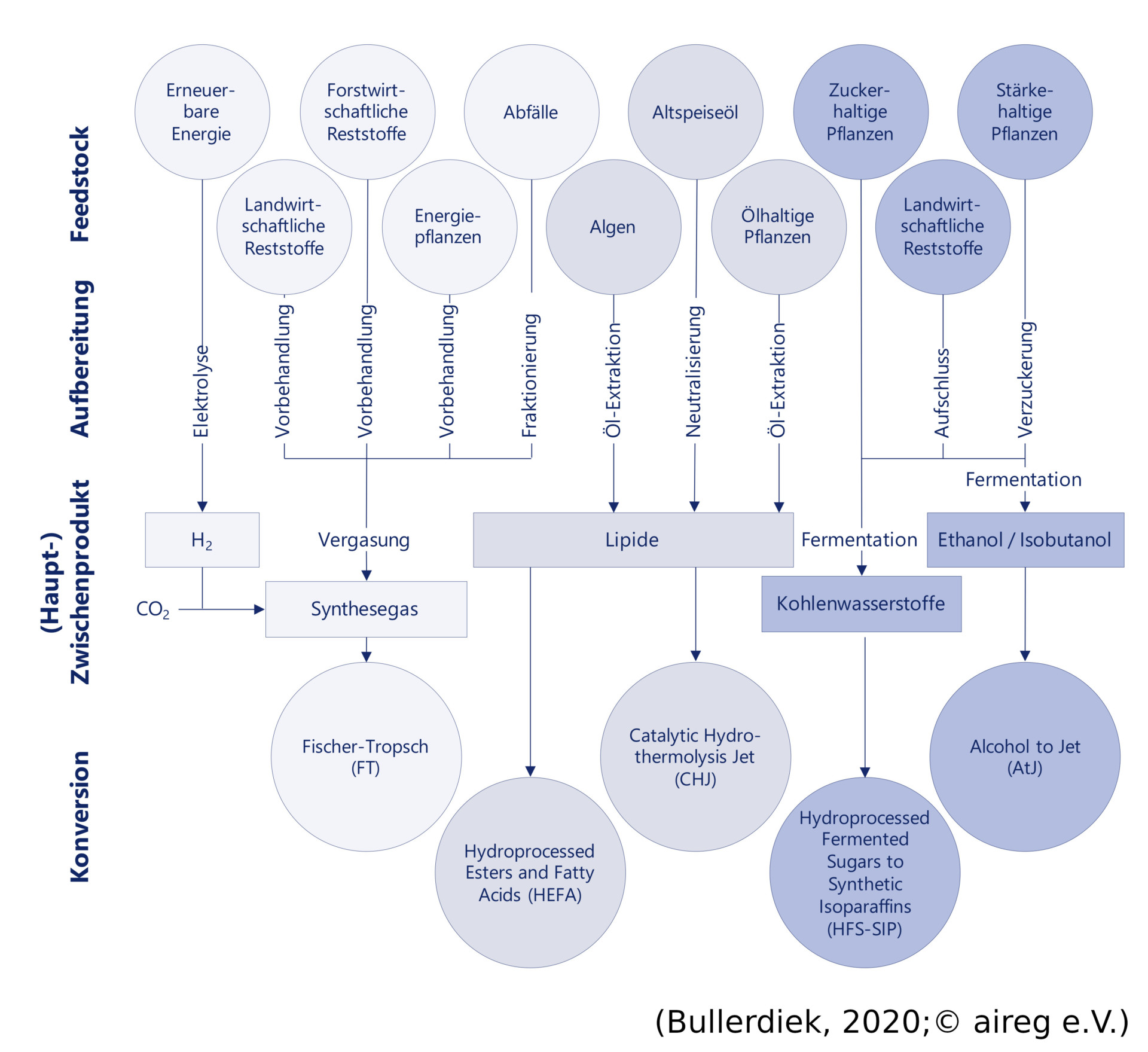 The origin of the feedstock used largely determines the sustainability of the fuel produced. For this reason, aireg focuses intensively on feedstock which substitute fossil sources in the short, medium and long term. Not only their quantitative availability is taken into account, but also the extent to which they meet generally accepted sustainability criteria in terms of quality. In addition to raw materials, a wide range of conversion processes and technologies are also assessed from a techno-economic perspective. Life cycle greenhouse gas emissions, the availability of the technology as well as a cost estimate of the products play an essential role. The aireg roadmap provides an overview of various raw materials, conversion technologies and steps for the market ramp-up of sustainable aviation fuels.

In addition to the provision of sustainable fuels, their use also has a major impact on their sustainability. Technological improvements can significantly reduce the fuel consumption of modern aircraft engines. In particular, the climate effects of aviation that are not caused by greenhouse gases vary greatly from region to region and over time. These effects are also influenced by fuel properties. Therefore, aireg studies the concrete use, quality and approval of alternative fuels.

In particular, the need for sustainable aviation fuels to meet climate targets is discussed, as are the implications for the non-CO2 related climate impact of aviation The approval of new aviation fuel types also plays a major role: in cooperation with international organizations, aireg is developing ways to accelerate the approval of new fuels. In addition, the effects of blends of fossil and sustainable aviation fuels are discussed. For this purpose, aireg has accompanied the DEMO-SPK project.